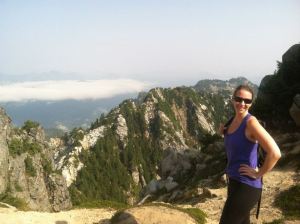 I was introduced to Hanford at a young age – growing up in Moscow, ID.  Moscow was considered ‘downwind’ from Hanford during the intentional release of iodine-131 from Hanford on December 2, 1949, and subsequent unintentional releases.  My mother developed thyroid disease (along with many of her friends and family members) and later developed breast cancer.  She created and distributed community health surveys in the Moscow-Pullman area and became an activist concerned with the health impacts of people living and working near Hanford.

I furthered my knowledge of Hanford by taking Professor Holly Barker’s anthropology class on Hanford Environmental Policy and Health, in the spring of 2013 at the University of Washington.  This is where I was introduced to Hanford Challenge and many of the Inheriting Hanford mentors as they visited our class as guest speakers.  Through class interviews, I was shocked to learn how many people in and around Seattle had never heard of Hanford (about 4 out of 5) and how the need to generate awareness surrounding the cleanup efforts was so important, especially among younger generations.

I am most interested in the public health risks associated with living and working near Hanford, and in speaking to people whose lives have been impacted by exposure.  I am also inspired to create more awareness surrounding cleanup of the Hanford site, and to insure this awareness reaches a diverse population.

To connect with Emily Turk or another mentor, please click here.